Ground was officially broken Tuesday for The Palomar Luxury Apartments on Old Jacksonville Highway. “These are going to be really nice,” Kennis Ketchum, president of Portfolio Development LLC, the developer on the project, said of the 216-unit apartment complex. “We worked really hard on the floor plans and the club plans. And the dog park is going to be really neat.” She said the apartments will be updated and open, with flat-top, eat-in bars, pendulum lights and beautiful common spaces, including a large fenced dog park with water fountains. “I’m a dog person so that is huge for me,” she said. The complex also will have some built-in garages and access from Grande and Old Jacksonville. Ms. Ketchum, of Dallas, joined others involved with the project for a groundbreaking ceremony Tuesday morning as a bulldozer moved dirt behind them on the 13.3 acres of land off of Old Jacksonville Highway, just north of Grande Boulevard. Ms. Ketchum said they chose the location for the apartment complex because, “This area of Tyler is where all the growth is…everything seems to be happening here.” She said they have been working on the project since early 2011, and the first apartment units should be available in February or March. The entire project should be completed in about a year, depending on the weather, she added. Fred and Charles Secker, of PaloTyler Partners, are the majority owners of the project, and Portfolio Development also has ownership in it, she said. Ms. Ketchum’s company, Portfolio Development, was started in 2001 and develops apartment complexes all over the southwest United States. She said they do multi-family and mixed-use projects, and this will be their second project in the Tyler area. Brothers Fred and Charles Secker have owned and managed apartment complexes in the Dallas/Fort Worth area for 30 years. They have 14 apartments and manage everything they own. The Seckers formed PaloTyler Partners for their first Tyler project. “We’re excited to be here,” Fred Secker said. He said they looked at a lot of places to build new apartments and Tyler seemed to be a more stable economic area and they liked the development on the south side of town. Andy Bergfeld, of Bergfeld Realty, brokered the land sale and said the “high-end luxury” apartments will feature one, two and three-bedroom floor plans. He said the apartments will feature high-end touches normally only found in single-family homes. The complex will be set far enough from Old Jacksonville Highway to offer a relaxing setting, he added. BBL Builders, of Dallas, is the general contractor on the project. 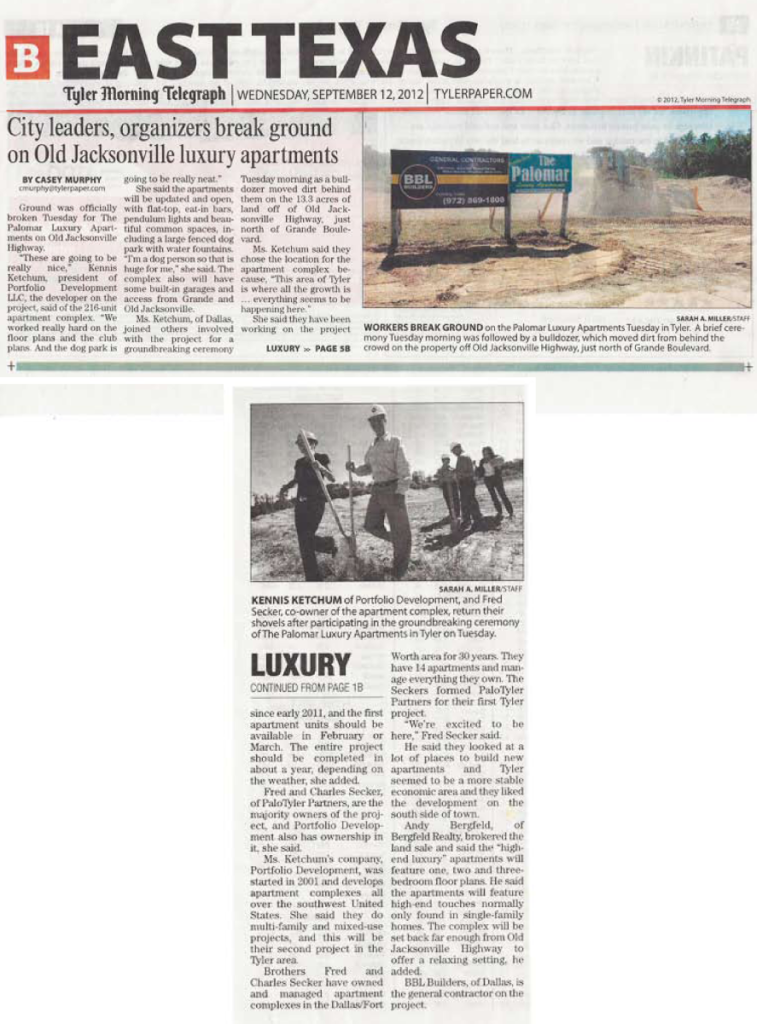